This is the most famous summer residence of the Romanovs, located 40 km from St. Petersburg on the coast of the Gulf of Finland.

Peterhof was founded by Peter 1 in 1714 and modelled after the regular gardens of Versailles. However, it appeared to be able to surpass its French prototype. Beautiful Garden and Park ensemble consists of 2 parks – Upper and Lower, which is decorated with 150 fountains, and the water supply system of fountains has been working since 1721.

The area of the Upper Park is only 15 hectares, while the Lower Park is quite large and covers an area of a little more than 100 hectares.

The layout of the Lower Park is defined by two systems of alleys that fan out from the Grand Palace and the Marley Palace. The planning scheme is thought over so deeply that any garden ornament, any detail is not hidden from the views of the guests. Each alley ends with either a Palace or a fountain. The regular Park is characterized by the symmetrical arrangement of its main structures. On the slopes of the hill, the cascades are arranged: the "Big" - in the center, the "Chess mountain" (in the Eastern part) and the "Golden mountain" (in the Western part). 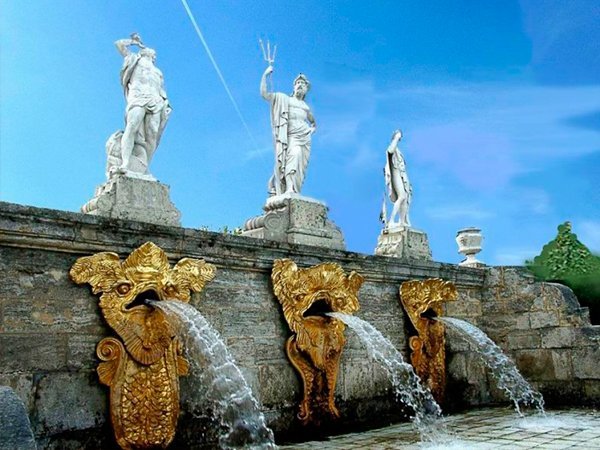 There are twin fountains in front of each of them: the "Bowls", the "Roman", the "Menagerie." Only one of the four cascades of the Lower Park is located in the stalls – this is the "Lion" cascade, the latest one by the time of creation, but this is it that completes the embodiment of the idea of Peter I, laid down in the composition of the Park: each Palace and pavilion has its own cascade.

After the revolution of 1917 Peterhof became a state Museum, and in the course of the Second World war it was completely destroyed. Only in virtue of the tremendous efforts of Soviet restorers, Peterhof opened its doors to visitors again a couple of years after the war.

If you'd like to visit the Grand Palace as well, it will dazzle you with the beauty of its decoration no less than the famous Garden and Park complex. You will visit the Throne and Dance halls, many living rooms and other Royal rooms.