Catherine's palace (with the Amber Room)

Just over the past couple of years, the Catherine Palace in Tsarskoye Selo (Pushkin) has become the most visited Museum after the Hermitage.
This famous summer Royal residence, founded by Peter I in the 18th century, is admired by tourists up to the present day. By the way, the first Russian railway, founded in 1837, was built precisely to carry members of the Royal family to Tsarskoye Selo, to their summer luxurious Catherine Palace.
Catherine Palace, built in the style of Russian Baroque will impress any tourist with gilded state rooms, mirrors, beautiful sets and, certainly, the Amber room. This hall is considered to be one of the eight wonders of the world, which was lost during the Second World war and completely restored again by the tercentenary of St. Petersburg.  About 6 tons of natural amber and 24 years of restorers' work were spent for reconstruction of the Amber room.
After visiting the Catherine Palace, you will walk around the Park, where you can visit the famous Grotto as well. This pavilion, built by a famous court architect named Rastrelli, was originally called the Sea pavilion and was decorated with 10,000 seashells that were imported from the Caspian sea. A walk in the Park will bring you a real pleasure. 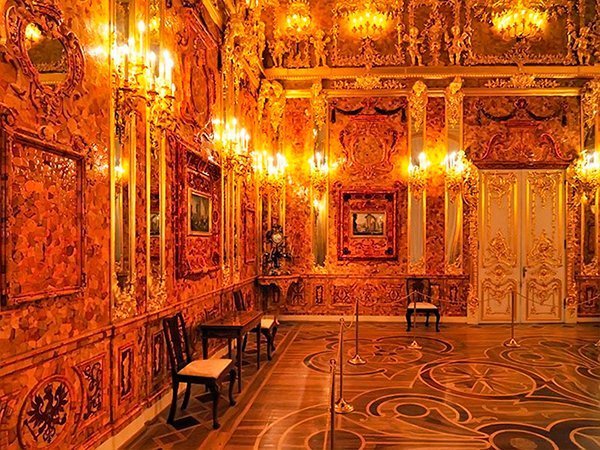