During the sightseeing tour, we offer you to see the entire historical center of St. Petersburg and to explore the Peter and Paul Fortress with its amazing Cathedral.

Peter the Great founded this fortress as a protection from the Swedes, but Russians defeated them before this construction was finished. In fact, this fortress was never used to defend the city and until 1922 it was a prison, where the son of Peter the Great, Alexey, then Dostoevsky, Gorkiy, Trotsky, Bakunin and Lenin's older brother, Alexander, were imprisoned.

After the nice walk through the territory of the fortress, you will visit the Peter and Paul Cathedral, which is the oldest in the city. There is a tomb yard of the members of the Russian royal family - the Romanovs. In 1998 the last Russian tsars were buried in the cathedral - Nicholas II with his family, killed in 1918 in Yekaterinburg in Siberia.

Nowadays the fortress is one of the most visited place in the city. 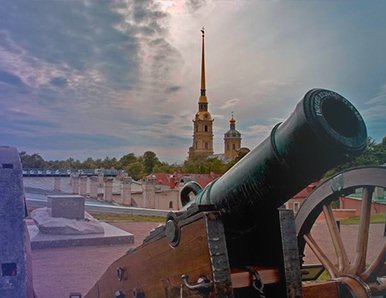